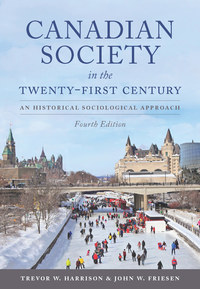 Now in its fourth edition, Canadian Society in the Twenty-First Century examines Canada’s development and current circumstances in a socio-historical framework. This foundational text encourages students to consider some of the tough questions Canadian citizens are likely to face in adjusting to the demands and challenges of life in the twenty-first century. Divided into three sections, the text investigates economic, political, cultural, and ideological perspectives through three main relationships: Canada and Quebec, Canada and the United States, and Canada and Indigenous Peoples. Each of these sections deals with large issues impacting all societies in the early 21st century: nationalism, neo-liberalism, and cultural values of social solidarity that persist, despite modernity. The final chapter revisits the importance of socio-historical methods, the roles of state and markets, and sociological theory in a wider context, ending with a look at the sociological implications of the global pandemic.

Decolonizing and Indigenizing Education in Canada

Women and Popular Culture in Canada

The Spaces and Places of Canadian Popular Culture

The First Nations of Ontario

Acknowledgements
Note to the Fourth Edition
Introduction: What Is Society?

PART 1: CANADA AND QUEBEC
Chapter 1: Living with the Consequences of 1760
Chapter 2: 100 Years of Solitudes
Chapter 3: The Constitutional Years and Their Aftermath
Chapter 4: The Return of the Nation

PART 2: CANADA AND THE UNITED STATES
Chapter 5: The Making of English Canada
Chapter 6: English Canada in Transition
Chapter 7: From Colony to Nation—to Colony?
Chapter 8: Canada in a Neo-Liberal (and Post-Neo-Liberal?) World