The First Nations of Ontario 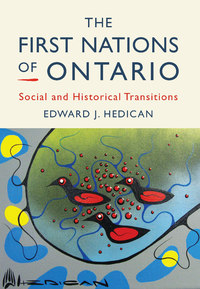 As John Steckley writes in his Foreword, this unique text provides “something that has been missing from the literature for too long”—the first comprehensive overview of the histories, cultures, and socio-economic conditions of the First Nations of Ontario, the province/territory with the highest Indigenous population in Canada. Situated within the larger context of Canadian Indigenous issues, anthropologist Edward J. Hedican provides an accessible introduction to the complex and diverse histories of the First Nations of Ontario from early prehistoric times to contemporary day.

Each chapter incorporates the voices and perspectives of Indigenous Peoples on topics such as treaties, the archaeology of early Ontario, neo-colonial trends, restorative justice, and the present challenges facing Indigenous communities. With an annotated list of online resources, a glossary of important terms, and an extensive appendix providing information on every First Nation in Ontario, this text is an invaluable resource both for students in Indigenous studies and anthropology as well as for anyone interested in the rich culture and heritage of the First Nations of Ontario.

Chapter 4: The Wendat and Haudenosaunee of the Eastern Woodlands